How do you call 47 students, 1 teacher and 1 driver going on a trip through Europe for 10 days?

STUDY TRIP. Since Friday April 20th, Marko took the burden to watch over 40 Finnish students while traveling 7 cities in order to visit the partner universities of Metropolia Business School. Despite a pretty tight schedule (!) the first delays already happened during the first longer ride from Stockholm to Maribo, but luckily all students made it back into the bus –even though Marko expressed prior that leaving about two students per bus stop, would be fine with him 😉

What we have been most afraid of?

Well, at one point starting the trip without our travel supervisor, because getting up in the morning (at 6 am) was just not bearable for him and his lifestyle. Fortunately sleeping in the bus in not only the best way for students to spend the bus ri

des (apart from the infrequent parties being thrown), but also for Marko. Luckily, he and the driver started employing some students as travel assistants and bookkeepers to ensure travel safety.

But what is actually the purpose of the trip?

Even though having a fun time traveling Europe, the idea behind this trip is rather academically. When students have to decide where to go for an exchange year reading the reports and talking to former students going to those places might not be the best and most informative option. Traveling to the university, experiencing their culture – at least a little, and seeing it oneself can give students a better insight and might ease the decision-making process later on.

Secondly the trip was organized in corporation with the course Introduction to European Markets taught by Marko. The students should have had the chance to see how the different countries and institutions work in an integrated and international environment. To make this experience more vivid, Marko had scheduled a visit to the European Parliamentin Brussels.

Luckily, we did not only had an introduction about the history and the working of the EU institutions, but we were able to visit the plenary hall in form of listening to a key-note panel about the “Regional Actors as the Vectors of Peace” – What role for the EU? At last an MP of the European Parliament, Mitro Repo from Finland, took the time to speak to us and express and share his visions and ideas.

What schools have we been to? 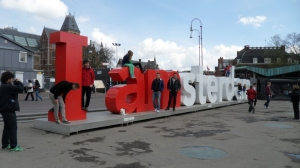 The first partner university welcomed us in Amsterdam –Diemen. We have been guests at the Hogeschool Inholland, which explained their programs and invited us to take a look at the student accommodations. I would like to use one of the nicknames the students gave to their housing “the prison”. If you might wonder why, the city is actually building a new prison in the vicinity and the housing is made of metal containers stacked up and connected by stairwells. Whoever wants to complain about HOAS again, and the noise you can hear from the neighbors, start living in the prison and HOAS will be like paradise.

Then the tour took us to Utrecht, the University City. Whoever wants to go there, make sure you have older students mapping out the area! I have never seen so many different wings, stairs leading up and down. Otherwise having everything close by is very convenient.

The last university the study trip has been to was the Berlin School of Economics and Law in Berlin. After listening to the presentation about the university and the study opportunities, students were given the possibility to look at the premises before heading to lunch and a walk up to the Reichstag’s glass dome. The afternoon then has been free for everybody to explore the city or to take the opportunity to shop.

After all, we spend about 4,000 km on the road (or on ferries), stayed in 4 hostels and one hotel and had the pleasure of five ferry rides during the 10 days duration of the Euro Trip 2012.

Can you decide where to go now???