At the beginning of my placement …

I arrived at the office at 9 and started the day by answering my emails as I do every other morning. Usually when I arrive at work I have approximately 20 emails to answer. Most of the emails are from students whom I am helping with their enquiries. I am also helping them with visa related matters and scheduling them interviews with my colleagues. After two hours when I finished my emails I went to our intranet to take a look at the new applicants who have applied on our website during the weekend. I processed the applicants by taking a look at their CVs and contacting them by e-mail. Together with my manager we took a look at different vacancies we could offer the applicants based on their profile and requirements and I suggested those to them by email.

After lunch I started interviewing training with my manager. She explained me what kind of questions we ask in the interviews and why and what are the most common questions the applicants are usually asking and how I should answer those. We came up with a question list and practised different kinds of interviews. Afterwards I followed an interview conducted by my colleague. Later on this week I will be practising more and next week I am planning to start the interviews myself.

After the training I helped my colleague working for our Italy Internship branch with marketing research. I looked for marketing companies in Milan we could collaborate with. Finally I answered my last emails and made a to do-list for tomorrow. I like making lists and notes in order not to forget anything. It is also nicer to arrive to work tomorrow knowing right away what I need to do. As today the temperature reached almost 50 degrees and the air conditioner was not working properly we had to finish earlier than normally. At 16:30 I shut down my computer, organized my desk and left for home.

In the middle of the placement

I arrived at work at 9 and started the day with a meeting with my manager and my colleagues. The company’s intranet page has changed a bit so we looked at it together and discussed certain processes we need to change. After the short meeting I looked at today’s interviews and started answering my e-mails. The schedule showed that I was to have 3 interviews, the first one at twelve. An hour before the first interview I received an email from the applicant who wanted to make sure that we will both be having a camera on during the Skype interview as he has a hearing disability and he needs to read from my lips. I asked my manager in case she wanted someone else with more experience to conduct the interview but she told me that she trusts that I can do it. I reviewed the applicant’s CV and the placement he was interested in and altered my question list for the interview a bit. Although I was very nervous, the interview went very well and I sent the student’s application to the company. 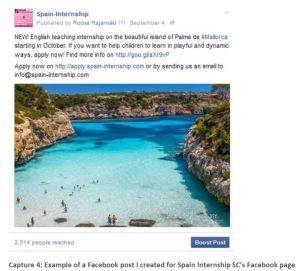 scheduled the posts.
I mainly posted our new vacancies but also tips about writing a good CV and the cultural celebrations in Spain in September. After scheduling the posts I answered all the messages that Spain Internship SC Facebook page received.

This week I am organizing an event for all the Spain Internship SC interns who are currently in Spain. Today I planned and budgeted the event together with my manager. Afterwards I went through our database and collected all the contact information of the students currently in Sevilla working for one of our collaborators. Afterwards I conducted my two remaining interviews and sent some internship offers to new applicants.

At the end of the day one of the project managers asked me to help her with one of her projects. She had a student who wanted to obtain a placement in Sweden working in the media and filming industry. As I speak some Swedish my colleague asked me to find companies that matched the student’s requirements in order for us to be in touch with them later to talk about possible collaboration. After finding a few promising companies and discussing them through with my colleague I finished my emails and left for home at 18:00.

At the end of the placement

I arrived at work at 9:15 and started my day by opening my inbox and taking a look at the day’s meetings. As it was the second last day of my placement I had a lot of work to finish which was why I was only being scheduled 3 interviews and one French testing. After finishing all my emails and conducting the first interview I had a short meeting with my manager to go through all the tasks I need to finish in the last two days. Afterwards I had another meeting with my colleague to take a look at our project. I have been working for a big project with one of the project managers of Spain Internship SC in the last two months. We took a look what we have already been doing and what we still need to do in these last two days in order to finish it.

My next task was to create and publish a new vacancy on our website. Last week Spain Internship SC made a contract with a new collaborator and based on the information they provided I wrote a job advertisement and published it on our website. All the information I was given was in Spanish so I first needed to translate it. After this I made a research about the company and created the vacancy. While I was making the vacancy I explained each step and how the process works to my colleague who will be doing this after I finish my placement. Afterwards I gave her a practice vacancy to make and when she was finished we went through it together in order for her to fully understand how to do it.

After publishing the vacancy I let my colleagues know that it is online and that we can start offering it to the students. Whenever the company has a new vacancy we need to publish it on different job portals and send it to the universities we collaborate with as well as promote it on Facebook. I was making a schedule for all the other interns of Spain Internship SC to the intranet page stating where they need to post the vacancy and by which date.

After lunch I had my second interview including a French testing. I was interviewing a girl who wanted to work in a company that required French at least at intermediate level. I had a talk with her in French and unfortunately her level was not high enough. After the interview I took a look at our vacancies and offered her something else that does not require French.

For the rest of the afternoon I trained our two new interns to conduct the interviews. We made an interview simulation where I acted as an applicant and the new interns needed to interview me. Before the interview I handed them my CV and told the placement I was interested in so that they had some time to prepare in advance. We conducted the simulation as if it was a real interview and in the end I was asking questions that I am normally being asked in the interviews. After the simulation  I gave them feedback and we discussed their mistakes and the things that were good. Then they listened to me doing my last interview of the day and making notes. At this point it was already 17:30 so I finished my emails and made a to-do list for my last day of work in order not to forget to do anything important. Finally, I left the office at 18:00.

If you are interested in a placement opportunity at Spain Internship SC you can contact them on their website. I would recommend Spain Internship SC for anyone interested in recruitment and wanting to gain knowledge in different fields as well as learning from Spanish language and culture. As the company is basically concentrated on human resources and recruitment services it is a great place to learn from these fields. Due to the small size of the company there is also a change to try marketing, PR and event organization tasks as well. There is a lot of work to do that also brings responsibilities that helps you to learn. You will also learn a lot about different cultures as you will be working and being contact with people from all over the world. When working with different companies all over Spain you automatically make connections that can benefit you later in your career. Spain is an amazing country with friendly people and Sevilla is by far the nicest city I have been to. In case you are not that interested in HR and recruitment but wish to conduct your placement in Spain I would strongly recommend to reach out to Spain Internship SC for help!