My name is Sandra, I am a former International Business and Logistics student from Metropolia Business School. I started school in 2013, and graduated in June 2016, one semester early. I did my internship at Turbiini Accelerator.

Turbiini is a startup accelerator located in Aviapolis Vantaa, Finland, they offer innovation services for companies, such as prototype building and concept design. Turbiini offers services for startups, including a coworking space and mentoring, to help startups grow and succeed. Turbiini Startup Accelerator was co-created by Helsinki Metropolia University of Applied Sciences and the City of Vantaa to promote creation of new businesses in the capital area by providing support services to startups. Turbiini is on a mission to create a new Silicon Valley, which is known for having a high concentration of technology based startups in one area, in Finland, we like to call it Silicon Vantaa.

I was working as a project assistant for Turbiini in the Spring semester of 2016. It was exciting to work in a fast paced startup environment, surrounded by creative and driven people. I got to do different things, from administrative tasks, such as answering e-mails to coordinating the co-working space among internal customers to attending events and representing Turbiini to external customers. I got to experiment with new technology like Virtual Reality (VR) and Augmented Reality (AR), I developed my expertise in these areas and was regularly giving demonstrations to both internal and external customers about the use of VR glasses, applications and so on.

I also got to represent Turbiini at Leija open doors day. Leija is created by the city of Vantaa, it is an office space which gathers all important service providers, such as the Patent and Register Office, Tekes, Finpro and Finvera, to help SME’s and entrepreneurs in Vantaa.  Our booth was very popular since we gave demonstrations of the VR glasses and even Helsingin Sanomat wanted to interview us.

As my job title implies, my main responsibilities were related to project management.

One of the most interesting projects I was involved with was an event production for Skanska, a construction company, which was opening their first office building in Aviapolis area, which is currently being developed and will become a major business center in Finland. The event was the grand opening of the first office building in Aviabulevardi, which was created around the concept of time traveling 10 years into the year 2026. A group of interns from Metropolia were developing Virtual Reality material to show how the area will look like in 10 years. The main reason why Turbiini took on such a project was to develop in-house expertise on the use of VR in event production and marketing in general. My tasks related to the event production were to create the concept, find and book entertainment, make a schedule for the visitors and another for the production team. A team of 4 interns were creating the VR material. The event was one of the most important outcomes of the internship. I was given a lot of responsibility and got to work together with a big customer, so while it was a huge challenge and stressful at times, it was also very rewarding to see the concept Aviabulevardi 2026 come to life. 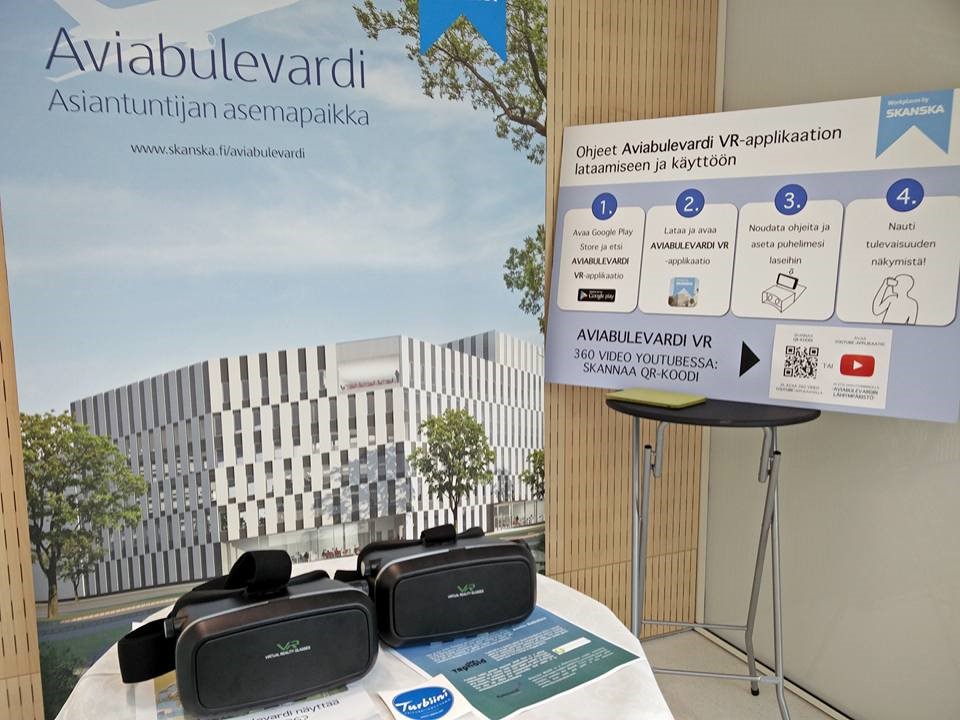 The app Aviabulevardi VR is available to download in the Google Play Store and video version of the App is in Youtube. The VR team created the application and video. I booked Miss Jones Swing band to perform at the event.

I have been interested in entrepreneurship for a long time, so this internship was an ideal place for me to learn more about startups and meet likeminded people. The period was a confirmation that I want to pursue a life of an entrepreneur after graduation. I am grateful that I got to meet some amazing people during the internship, I made good friends and expanded my professional network during this time. Network is important – I found this position thanks to a contact from Metropolia Business School – Hannes Jesar. He is a graduate of MBS, now working as an advisor in Turbiini.

I got to work together with other interns from various fields such as business, IT, and design. Tuua Huuskola wrote a thesis for Turbiini, a marketing plan which she was executing during the Spring semester. Tuua is studying business in the Finnish side of Metropolia. We were studying together in Myyrmäki for 2,5 years, but met for the first time in Turbiini and quickly became good friends.